Questions from serial number 1 to 20  are MCQs. Each question carry 1 mark.

Questions from serial number 21 to 28  are 3 marks questions. Answer of these questions should not exceed 80 words each

Questions from serial number 29 to  34 are 5 marks questions. Answer of these questions should not exceed 100 words each.

Questions from serial number 35 to  36 are  3 marks questions.

Q.4. In which course of a river meanders are formed ?
(a) Upper course
(b) Middle course
(c) Lower course
(d) Both upper & middle

Q.6. Which organ of the UNO is the most powerful for International peace ?
(a) General Assembly
(b) Security Council
(c) International Court of Justice
(d) World Bank

Q.7. Who amongst the following was not a member of the Constituent Assembly of India ?
(a) Dr. Rajendra Prasad
(b) Dr. B. R. Ambedkar
(c) H.C. Mukherjee
(d) Mahatma Gandhi

Q.9. Which one among the following is the most labour absorbing sector ?
(a) Agriculture
(b) Fisheries
(c) Poultry farming
(d) Mining

Q.10. Which one of the following activities is associated with the primary sector ?
(a) Manufacturing
(b) Education
(c) Agriculture
(d) Transport

Q.11. What did the red cap worn by Sans Culottees in France symbolize?
(a) Brotherhood
(b) Danger
(c) Anger
(d) Liberty

Q.12. Which one of the following group was not benefitted by the French Revolution ?
(a) Peasants
(b) Workers
(c) Nobility
(d) Agricultural labourers

Q.13. The neighbouring countries that share their boundaries with India are :
(a) Pakistan and Afghanistan
(b) Myanmar and Bangladesh
(c) China and Nepal
(d) All the above

Q.14. Which one of the following rivers is a peninsular tributary of the Ganga ?
(a) Ghagar
(b) Son
(c) Gomti
(d) Gandak

Q.19. On which of the following does the quality of population not depend?
(a) Literacy Rate
(b) Income
(c) Health status
(d) Skill Formation

Q.20. Which one of the following is not an activity of primary sector ?
(a) Transport
(b) Mining
(c) Forestry
(d) Animal Husbandry

How were conservatives different from Radicals and Liberals?

The liberals did not believe in universal franchise. In contrast, radicals wanted a nation in which government was based on the majority of a country’s population. Liberals felt men of property mainly should have the vote. They did not want the vote for women. On the other hand, the radical, supported women’s suffragette movements and opposed the privileges of great landowners and wealthy factory owners. They were not against the existence of private property but disliked concentration of property in the hands of a few.

Conservatives were opposed to radicals and liberals. They accepted that change was necessary but believed that the past had to be respected and change had to be brought about slowly and gradually but steadily.

(i) During schooling, German children were subjected to a prolonged period of ideological training. Racial science was introduced to justify Nazi ideas of race.

(ii) Stereotypes about Jews were popularised. Children were taught to be loyal and submissive, hate Jews, and worship Hitler.

(iii) Sports were promoted so as to nurture a spirit of violence and aggression among children.

(i) Doab : The area between two rivers or river systems.

(ii) Bhangar: The largest part of the Northern Plains is formed of older alluvium. They lie above the floodplains of rivers and present a terrace like feature. This part is called Bhangar.

(iii) Bhabar: The Himalayan rivers deposit pebbles in a narrow belt of about 8 to 16 km in width lying parallel to the slopes of the Shivaliks. It is known as Bhabar.

How were the Himalayas formed?

Geologists claim that a sea was located where the Himalayas now stand. Internal and external changes of Earth’s crust occurred. It is said that one of the crustal plates, called the Indo- Australian plate, separated from the super-continent named Gondwanaland. It drifted slowly towards the north to collide with the Eurasian plate five million years ago. The northern edge of the Indo-

Australian plate was pushed beneath the Eurasian plate. After the collision of these two plates, the sedimentary rocks of enclosed ocean folded to form the Himalayas.

Describe any three important features of the Tapi Basin.

(i) The Tapi rises in the Satpura ranges, in the Betul district of Madhya Pradesh.

(ii) It also flows in a rift valley parallel to the Narmada but it is much shorter in length.

(iii) Its basin covers parts of M.P., Gujarat and Maharashtra.

How values of freedom struggle were embedded in the Preamble of Indian Constitution? Explain.

The Preamble declares India to be a sovereign, socialist, secular democratic republic. It guarantees social, economic and political justice, liberty of thought, expression, belief, faith and worship. It further emphasises equality of status and of opportunity. It assures the dignity of the individual and the unity and integrity of the country.

Mention any three values that an elected leader of a democratic country should demonstrate to run a welfare government.

(i) An elected leader must look after the needs and concerns of people.

(ii) He must be honest, devoted to his duty and be hard working.

(iii) He must not be corrupt and must have a clean image, and work as per the spirit and rules of the Constitution of India.

(a) Constitution : It is a set of written rules that are accepted by all people living together in a country.

(b) Preamble : An introductory statement in a constitution which states the reasons and guiding values of the constitution.

(c) Constituent Assembly : An assembly of people’s representatives that writes a constitution for a country.

Why is it important to develop irrigation facilities? Explain.

Traditional methods of irrigation are not suitable in modem farming. Farmers cannot afford to rely on the Monsoons alone. Modem irrigation facilities such as diesel-run or electric-run tubewells are able to irrigate fields of crops throughout the year. Farmers can grow multiple crops in a year from the same piece of land if irrigation facilities are modem and well developed. Our farmers are dependent on crops for their livelihood. Without proper irrigation enough food grains cannot be grown.

How has the environment been adversely affected by the Green Revolution? Explain.

Land being a natural resource, it is necessary to be very careful in its use. Scientific reports indicate that the modem farming methods have overused the natural resource base.

In many areas, Green Revolution is associated with the loss of soil fertility due to increased use of chemical fertilisers. Also, continuous use of groundwater for tubewell irrigation has reduced the water-table below the ground. Environmental resources like soil fertility and groundwater are built up over many years. Once destroyed it is very difficult to restore them. We must take care of the environment to ensure future development of agriculture.

Define the theory of plate tectonics. How has their movement resulted in the formation of Himalayas? Explain.

According to this theory, the crust of the earth has been formed out of seven major and some minor plates. The movement of the plates results in the building up of stresses within the plates and the continental rocks above, leading to folding, faulting and volcanic activity.

Geologists claim that a sea was located where the Himalayas now stand. Internal and external changes of Earth’s crust occurred. It is said that one of the crustal plates, called the Indo- Australian plate, separated from the super-continent named Gondwanaland. It drifted slowly towards the north to collide with the Eurasian plate five million years ago. The northern edge of the Indo- Australian plate was pushed beneath the Eurasian plate. After the collision of these two plates, the sedimentary rocks of enclosed ocean folded to form the Himalayas.

What is shifting agriculture? Why was it regarded as harmful by the British? Answer:

Shifting agriculture or swidden agriculture is a traditional agricultural practice in many parts of Asia, Africa and South America. It has many local names such as ‘lading’ in South-East Asia, ‘milpa’ in Central America, ‘chitemene’ or ‘tavy’ in Africa, ‘chena’ in Sril Lanka, ‘dhya’, ‘penda’, ‘bewar’, ‘nevad’, ‘jhum’, ‘podu’, ‘khandad’ and ‘kumri’ in India.

In shifting cultivation, parts of a forest are cut and burnt in rotation, seeds are sown in ashes after the first monsoon rains and the crop is harvested by October-November. Such plots are cultivated for a couple of years and then left fallow for 12 to 18 years for the forest to grow back.

It was regarded by the British as harmful for the forests. They felt that land which was used for cultivation every few years could not grow trees for railway timber. When the forest was burnt, there was the danger of the flames spreading and burning valuable timber.

Why did the British introduce Wasteland Rules? How did they affect the pastoralists? Explain briefly.

Wasteland rules were introduced because to the colonial officials all uncultivated land appeared to be unproductive. It produced neither revenue nor agricultural produce. By these rules uncultivated land was taken over and given to select individuals. These individuals were given concessions and encouraged to settle on these lands. Some of them were made headmen of villages. In most areas, lands taken over were actually grazing tracts, regularly used by pastoralists, and the decline of pastures created trouble for the pastoralists.

Which innovations helped farmers to increase agricultural production in England?

First new lands were brought under cultivation, landlords sliced up pasture lands, carved up open fields, cut up forests, took over marshes. The farmers started growing turnips and clover as they discovered that these crops improved the soil and made it more fertile. Turnip was also good fodder for the cattle. So, they became part of cropping system.

They also realised that nitrogen was important for crop growth. Turnip and clover restored the nitrogen and made the soil fertile again.

Why did cultivation expand rapidly under colonial period? Give 5 points.

(ii) In the early 19th century, the colonial state considered forests to be unproductive.

(iii) Forests were wilderness which had to be brought under plough.

(iv) Agriculture could yield food grains and revenue, and enhance the income of the state.

(v) Expansion of cultivation was seen as a sign of progress and prosperity which the colonial state wished to appear to the public.

Who were the Banjaras? Describe their activities.

Banjaras were a well-known group of nomads and graziers who herded cattle like sheep, goats and cows. They lived at outskirts of villages of U.P., Punjab, Rajasthan, M.P., and Maharashtra. They moved from one area to another constantly in search of good pastureland for their cattle. They camped near pastures.

After setting for a brief period they moved on to new pasture. They moved over long distance selling plough cattle and other goods to villages in exchange for grain and fodder. In course of time, Banjaras became grain merchants selling goods from village to village. They moved in caravans of bullock carts selling grains.

What were the causes for terrifying dust storms in 1930s in the USA? Give five reasons.

(i) Early 1930s were years of persistent drought. Rains failed year after year and temperatures soared.

(iii) Ordinary dust storms became black blizzards because the entire landscape had been ploughed over many times, stripped

of all grass and plants that held soils together.

(iv) When wheat cultivation had expanded dramatically in the early 20th century, zealous farmers had recklessly destroyed all vegetation.

(v) Tractors had over ploughed vast tracts of farmland, had turned the soil into tiny dusts, and had broken the sod into dust.

Locate and label the following on the given outline map of world. 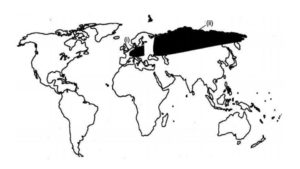 Locate and label the following on the given outline map of the world. 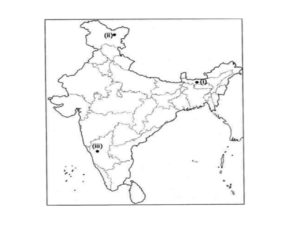