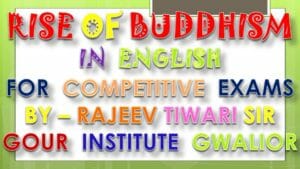 Rise  of Buddhism was founded in the sixth century by Gautama Buddha. The Buddha was born in Lumbini, Nepal in 563 BC. He died in 483 BC in Kushinagar, Uttar Pradesh, India.  Initially Buddhism was propagated in different parts of India. INDIAN SCULPTURE

It received the patronage of many rulers in various regions of India. Emperor Ashoka played an important role in propagating Buddhism. Gradually, this religion expanded into Southeast Asia, and China and Japan. The beliefs of Buddhism are quite similar in Buddhism to Vedic religion and Jainism. Like Vedic and Jainism, attainment of salvation in Buddhism has been described as the most important goal of life. Like Jainism, initially idol worship was not done even in Buddhism, but later in Buddhism also idol worship started. The Buddha refuted the antiquarian approach, which was hindering the stability of the new socio-economic system and the rise of new ideas. Buddha had refuted the caste system and rituals. Like Jainism, the principle of non-violence is also very important in Buddhism. According to the Ashtangik Marg Buddha, desires are the cause of miseries in human life. The  Ashtangaik Path is an important tool for getting rid of these sorrows and achieving self-knowledge. The eightfold path is the following: Samyak Darshan – Belief in four truths – Samyak sankalp – Samyak vaksh – the determination of mental and moral development – Do not lie and do not hurt anyone with speech Samyak Karma – Do not torment someone with their karma Samyak Jeevika – Livelihood Do not harm anyone else – right effort – strive to improve oneself, right memory – use wisdom to explain knowledge C Samyak Samadhi – Achieving Nirvana The Development of Buddhism After the origin of Buddhism, it received the patronage of many rulers, as a result of which the expansion of Buddhism was possible in South Asia, South-East Asia and Far East countries besides India. . The role of Emperor Ashoka was very important in the expansion of Buddhism. 4 major Buddhist musicians were held in different time periods. The first Buddhist music was held at the Rajgriha, the first Buddhist music, headed by Mahakassap. It was organized during the tenure of Ajatshatru in 483 BC. Vinay and Dharma were collected in this musical. It compiled the teachings of the Buddha. And they were classified into two Pitakas called Sutta and Vinay. Second Buddhist Council The Second Buddhist Council was organized in 383 BC in Vaishali under the chairmanship of Subukami. At that time Kalashoka was the ruler of Magadha. In this association, Buddhism was divided into Mahasanghika and Sthavarism. Third Buddhist Council The third Buddhist music was adopted in Pataliputra during the reign of Emperor Ashoka in 247 BC. Abhidhamma Pitaka was added to it, and the narrative was compiled. In this music, the cult of cult was dominated. Mogliputtisya was the president of this music. Fourth Buddhist Council The fourth Buddhist musical, held in Kundalvan in Kashmir in 102 BCE, was headed by Vasumitra while the vice-president was Ashwaghosh. This music happened during the tenure of Emperor Kanishka. In this association, Buddhism was divided into two sects named Hinayana and Mahayana. During this time Sanskrit language was used on a large scale. During this time a book called Vibhashāstra was composed. This was the last Buddhist association. The main sects of Buddhism are Theravada / Hinayan Hinayana or Theravada Sampradaya, which consists mainly of those who are primarily conservative. They believe in following Buddha’s teachings as they are. He was not in favor of changing the teaching of Buddha. According to this community, Buddha is a great man, but he is not a deity. The followers of this community do not worship Buddha. This religion was originated in Kashmir, it was related to the Sanskriti Tantra Mantra. Sadhana was extremely rigorous in this sense. In the Hinayana sect, the emphasis is on living a monk life. Dharmatrat, Ghokshaka, Vasumitra, Budhadeva, etc. were the chief acharyas of this sect. Four animals are associated with the life of Buddha in Hinayana sect. The elephant is considered to be the symbol of Buddha’s womb, the bull is the symbol of youth, the horse is the symbol of home sacrifice and the lion is the symbol of prosperity. Further Hinayana was also divided into two sects, Vaibhashka and Sautrantika. The other main sects of Hinayana are the following: Stalist Sarvastivist Samitya Mahayana Sampraday According to Mahayana Sampraday, one needs a guru for Nirvana. The Bodhisattva is considered for inspiration and help, the Bodhisattva attains nirvana. There are two other schools of Mahayana Buddhism – nihilism and media and science  or  yoga.  Nihilism was the originator of this doctrine Nagarjuna, his famous work is Madhyamakarika. Nihilism means the idea of ​​emptiness and non-existence. Chandrakirti, Shantideva, Aryadeva and Shanti Rakshata were the prominent scholars of this religion. Buddhapalit and Bhavivekave were important linguists of nihilism in the fifth century. Vigyanism Vigyanism was developed by Maitreyanath in the third century. This opinion is not only about science.