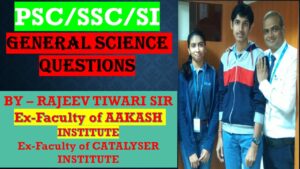 The velocity that a body with less mass must achieve in order to escape from the gravitational attraction of a more massive body is called? Escape Velocity.

Any substance which when added to a reaction, alters the rate of the reaction but remains chemically unchanged at the end of the process is called? Catalyst.

The distance travelled by light in one year is called? Light year.

Study of insects is called? Entomology.

A unit used to express the focal power of optical lenses? Dioptre.

The temperature at which all substances have zero thermal energy? -273 degree celcius.

.An organism which derives its nourishment from another living organism is called? Parasite

Which is the world’s first man-made satellite? Sputnik-I.

The study of the inter-relations of animals and plants with their environment is called? Ecology.

The rate of change of position of a body with respect to time in a particular direction and is a vector quantity is called: Velocity.

Newton’s which law states that the rate of change of momentum of a body is directly proportional to the force applied and takes place in the direction in which the force acts? Newton’s second law of motion.

The blood vessels carrying blood from the heart to various parts of the body is called? Artery.

In which atmospheric layer are the communication satellite located? Ionosphere.

Energy stored in a dry cell is? Chemical energy.

When we wind a watch which energy is stored? Potential Energy.

Common cold, Influenza, Chickenpox and Measles are caused due to the attack of Virus or Bacteria? Virus.

Small pieces of solid matter which are found scattered in the inter-planetary space of the solar system are known as? Meteoroids.

The scientific principle behind ‘Fibre Optics’ is? Total internal reflection of light.

.Which planet is the brightest of all the planets? Venus.

On which phenomena the process of Dialysis used on patient with affected kidneys is based? Osmosis.

When a piece of ice floating in a beaker of water melts, the level of water will rise or fall? Remains the same.

The largest gland in the body which is dark red in colour is? Liver.

The ancient oriental art of growing trees in dwarf form is called? Bonsai.

In Internet jargon the full form of ‘http’ is? Hyper Text Transfer Protocol.

Chemical technology dealing with the conversion of base metals into gold is? Alchemy.

The negatively charged particles which revolve around the nucleus of the atom in certain orbits is called? Electron.

Substances which react with acids to form salts is called? Base.

When a cricketer lowers his hand while catching the ball, it saves him from injury due to? Conservation of momentum.

What is the unit of heat? Calorie.

The ability of a body to resist tension or compression and to recover its original shape and size when the stress is removed is called? Elasticity.

The branch of biology dealing with study of Heredity is? Genetics.

Optical illusion often witnessed in deserts when the objects on the surface of the earth at some distance appear as if reflected from surface of water owing to unequal heating of the different parts of atmosphere is called? Mirage.

The scale used to measure the magnitudes of earthquakes is called? Richter scale.

The branch of science which deals with study of nature and properties of light is called? Optics.

Kwashiorkor is caused due to the deficiency of? Protein.

Volatile substance that incapacitates for a time by powerfully irritating the eyes, provoking tears is called? Tear gas.

The speed greater than the speed of sound is called? Supersonic speed.

Who is the inventor of Dynamite? Alfred B. Nobel.

The heat required to raise the temperature of 1 kg of a substance through one degree celsius is called? Specific heat.

Lymph differs from blood in not having? Red Blood Corpuscles.

The smallest part of an element that can take part in a chemical reaction is called?   Atom.

Water that does not form lather with soap easily is called? Hard water.

Substances used for destroying or stopping growth of micro-organisms in living tissue is calles? Antiseptic.

The unit used to measure loudness of sound is? Decibel.

The lines drawn on maps joining the places having same barometic pressure is called? Isobars.

Universal receivers can receive blood from? Groups O, A, B and AB

Study of Grass is called? Agrostology.

Oil spreads over the surface of water because? Oil has less surface tension than water. 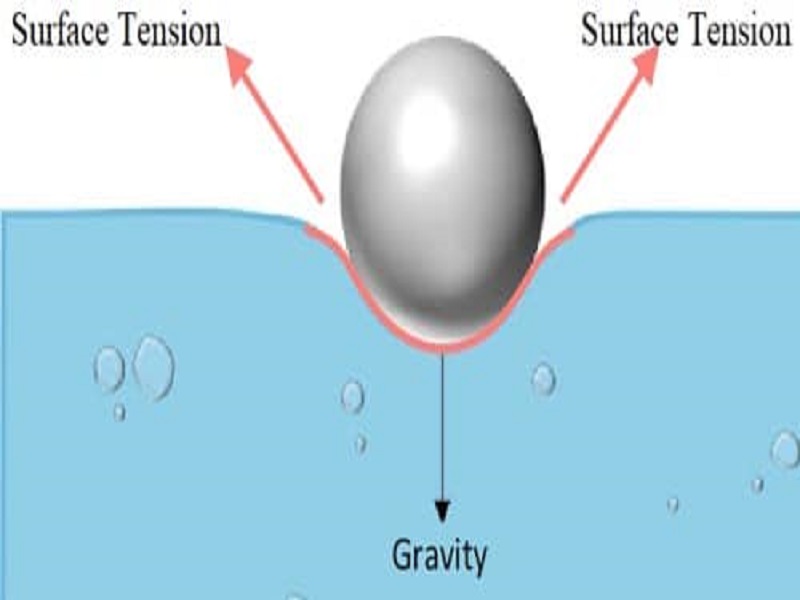 Velocity of a body is rate of change of its position in a definite direction, True or False? True.

When the lift is going down with uniform acceleration the apparent weight of a man in a lift is more or less than his real weight? Less.

Study of Tumour is called? Oncology.

Which physical property will be unaffected with increase in quantity? Density.

A person presses the earth least when he is? Lying on the ground.

Which law is involved in the act of cleaning a carpet by beating it with a stick? First Law of Motion.