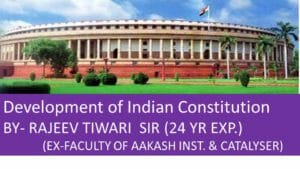 Brief History of the Development of Indian Constitution.

under the East India Company.

* To keep Bengal administration in their favour, the British enacted

many Acts which later became the

council of the Governor-general established consisting of 4

members. They exercised their powers

jointly. The main features of this Act are-

Brief History of the Development of Indian Constitution

* Also established Board of Control for Political affairs.

* It Provided that the member of Home Govt. (a member of Board

of control and Employees) were in the future

to be paid salaries from the Indian revenues and not from British Exchequer.

* It abolished the monopoly of the company’s Indian trade and

threw open to all British subjects under  certain regulations.

* It reduced the company from a governing body to a mere administrative body of British Govt.

* A Law commission was constituted for consolidating, codifying and  improving Indian laws.

* Strength of the Court of Directors  reduced

* The law member became the full member of the Governor-

* This was the last charter Act.

* Indian administration had taken over by British crown.

* Portfolio system was introduced in India.

* A council of 15 members, known as the council of India, was created.

* Indian administration came under direct control of the British crown.

* Governor-General was empowered to issue ordinance in time of an emergency.

* Beginning of Parliamentary system as this Act allowed discussion over budget and quarries by members.

and Satyanarayan Singh became the first Indian to be appointed to

* Powers of Legislatures were enlarged allowing them to pass resolutions, ask questions and

supplementaries , vote on separate items in the budget but budget as a whole could not be voted upon.

* No of elected members increased in Legislative councils

Assembly and council of states.

* The No. of the member in the council of states was 60 and

out of the 34 were elected for a five-year term.

* 145 members were the strength of Legislative Assembly and

Both House were given equal rights.

* The only difference was that the lower house had the power to pass the budget.

* The Act introduced ‘Dyarchy’ in the provinces which provided for

the division of provincial subjects

into “ Reserved” and “ Transferred” categories.

* Secretary of state for India was empowered to appoint comptroller and Auditor-General in India.

* Provided the Provision to establish a Public Service Commission in India.

* This Act made the provisions for an all India federation consisting of eleven British Provinces, six chief

commissioner’s areas, and those princely states which desired to be the part of the federation.

* At the provincial level ‘autonomy’ replaced dyarchy and responsible government was introduced.

Dyarchy at the center level:  Glossary of Geography

other union subjects, a council of ministers was set up.

* Its Jurisdiction was extended to provinces and princely states

there was chief justice and two other judges in the court

* Privy council (London ) has the supreme power of Judiciary

The supremacy of the British Parliament:

* This Act could be amended by the British parliament. Only the

British Parliament was empowered to amend

at the center and provincial level and it  extended to Anglo –

* There was no preamble in the Act.

* The Act separated Burma from India and two new states were

Brief History of the Development of Indian Constitution

Indian Independence Act, 1947:  It was proposed on 4th July

Main provisions of this Act are as follows-

Dominions, namely India and Pakistan. It is

decided to hand over the responsibility of power to the constituent

assemblies of the dominion states.

* There would be separate Governor-General for each Dominion (India &Pakistan)

* The Act also laid down temporary provision for the government of

the dominions by giving the status of  Parliament with the full

power of the Dominion legislature to both the constituent

* The Act further mentioned that till the new constitutions are not

effective, the governments in the two  states will be run on the basis

* Sovereignty and responsibility of the British Parliament abolished.

* Pakistan was to comprise East Bengal, West Punjab, Sind, and the Sylhet district of Assam.

4 thoughts on “Development of Indian Constitution”